There are numerous situations where creating your own framework is advantageous. Perhaps you have a block of code that you use repeatedly in many different projects. Perhaps you are building a plug-in system for your application and want the infrastructure to be available both to the application and to any plugins that are coded.

A Cocoa framework is another project type in Xcode. The end result is a bundle, similar to an application bundle. Inside of this bundle is the compiled code you wrote and any headers that you want exposed. The headers are important. Without them, just like any other piece of Objective-C code, it is very hard to code against.

Building a Framework in Xcode

Building a framework within Xcode is straight-forward. There is already a project template specifically for Cocoa frameworks so that is where we will start. 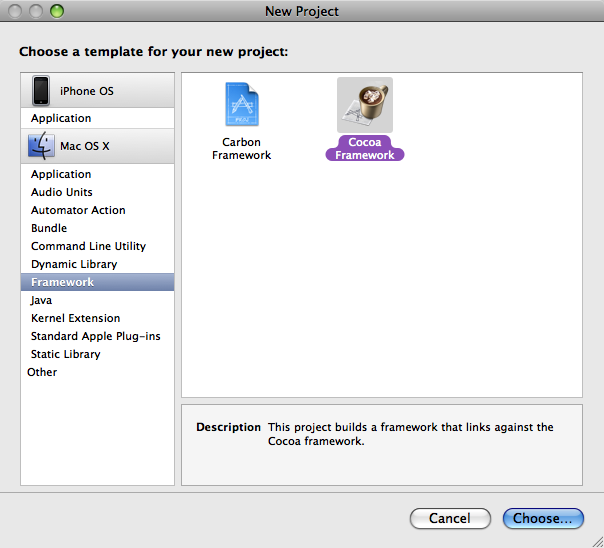 Care must be given to the headers that we write and that we expose as part of that framework. In general, we really only want to expose the headers that users of the framework are going to interact with. If a header is completely internal to the framework then do not plan on exposing it. In addition, it is a good idea to have a wrapper header that users can import and gain references to all of the public headers. Since a framework will undoubtably contain more than one class file, how do we roll all of that up into one header? One solution I have seen is to create a separate header file and copy all of the interfaces into it. Unfortunately that solution can become unwieldy very quickly. My preferred solution is to build a “wrapper” header file that imports all of the headers that you want exposed. This is demonstrated in Code Sample 1.

Which headers should be included

For some headers, the answer to that question is easy. However, there are some gotchas that need to be planned around. If an object is referenced in one of the public headers then its header must also be public. Therefore if we want an object to be private/hidden/internal then we need to make sure there are no public references to it anywhere in any of the exposed headers. For example, if we had a an internal object called InternalObject and we referenced it in our header, the header for InternalObject would need to be public. See See Image 2. 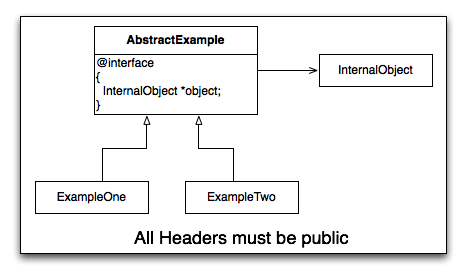 However, if the reference is an id instead, we can keep the InternalObject private and its header un-exposed. See Image 3. 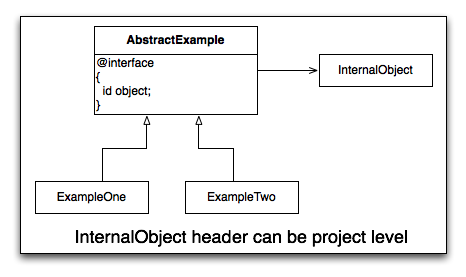 On thing to note is that in both cases, the AbstractExample is public even though we do not want anyone extending it. Because both ExampleOne and ExampleTwo are subclasses of AbstractExample its header must therefore be included in the framework. To make this a little confusing, this is NOT the case if the application and the framework both exist in the same project! If we look at the included project (called Example), and turn AbstractExample to project, everything will work just fine. However, if we take that compiled framework and use it in the second included project (called Test), it will fail. Therefore depending on how we are going to use the framework, superclasses will probably need to be included.

Now that we have our framework built, how do we use it? There are three places we can put this framework. We can make it system accessible, user accessible or application accessible.

System accessible frameworks are just like the frameworks that come with OS X. They can be imported into any application. For this magic to work, however, they need to be installed in a system level folder; specifically /Library/Frameworks. Go ahed and look in that directory now. If your system is anything like mine it is empty. Why? Because system level frameworks require root access to be installed and therefore require privilege escalation to get them there. Generally this is a and there are few frameworks that follow this path.

Since it only really makes sense to have our framework be application accessible, we need to tell it that when we build it. While this is not important for an application that has the framework included in its build cycle, if we want our application to be used by other applications, it becomes critical. When an application links to a framework, it needs to know where the final resting place of that framework is going to be. The default for the framework template is ~/Library/Frameworks. Clearly this needs to change.

To get a framework to acknowledge that it will be used inside of an application, we have to set the installation directory to a relative path. That relative path is:

Once we have the installation directory set, it is time to include it in our application.

Setting up the targets for our application 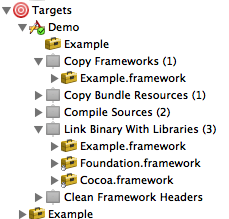 The other additional build phase is called “Clean Framework Headers” and is a script build phase. The purpose behind this phase is to delete all of the header files out of the application bundle once everything is finished. Why? Because they are not needed at runtime and there is no point in distributing them. When we distribute the framework on its own we definitely need to leave them but for the included framework they are just wasted bits. Therefore the script removes them as the final build phase for the application only. See Code Sample 2.

For the curious, the internal structure of a framework is similar to an application. There is a compiled binary and a Resources directory that contains all of the xib, nibs, etc. There is also a Headers directory (and in some cases a PrivateHeaders directory) that contains all of the exposed header files. Where things chance is that a framework is versionable. The actual headers, resources and binary are actually stored in the Versions/${VERSION} subdirectory. From that directory there are sym-links up to the root directory of the bundle and also to the Versions/Current subdirectory.

The purpose of this is to allow multiple versions of a framework to be stored within one bundle. However it is unlikely you will ever see more than one version in a bundle. It is a manual process to combine the versions and each version has to be kept in its own xcode project and merged by hand. In addition, since it really only makes sense to have frameworks inside of application bundles, it does not make much sense to have multiple versions of the framework. Nevertheless the functionality is there for those pesky edge cases.

Frameworks definitely have their place. They are very useful when writing a plugin architecture, etc. However, since they only make sense to include them in an application, unless you are sharing the framework or doing plugins, chances are it is better to just include the source code and be done with it.

You don’t have to throw away type checking just because you don’t want to expose a class. You can use the @class directive to declare the existence of an Objective-C class without exposing the whole interface. For example:

If you do this, you don’t have to expose the “InternalObject.h” file. Granted, somebody reading your header files will know of the existence of InternalObject, but giving up type checking to keep the class name a secret is kind of petty.

I use @class in all of my header files; the only time a header needs to include the header of another class is when it is a subclass of that other class.

(P.S. Logging in with openid doesn’t seem to work.)

For a hands on tutorial: Uli Kusterer has a video available from the Mac Developer Network: